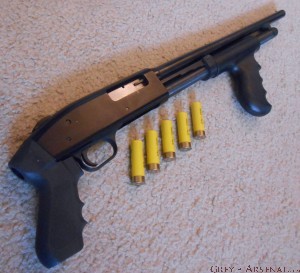 Alright, this one is going to be short, but I got a request from a new Mossberg 500 owner (and new shotgun owner in general) without a manual who wanted some basic instructions, such as safety, loading, unloading, that sort of thing.  This user is already aware of basic firearm use and safety.

So, right to it- most important is Safety Lever location, which is pretty obvious in this case. 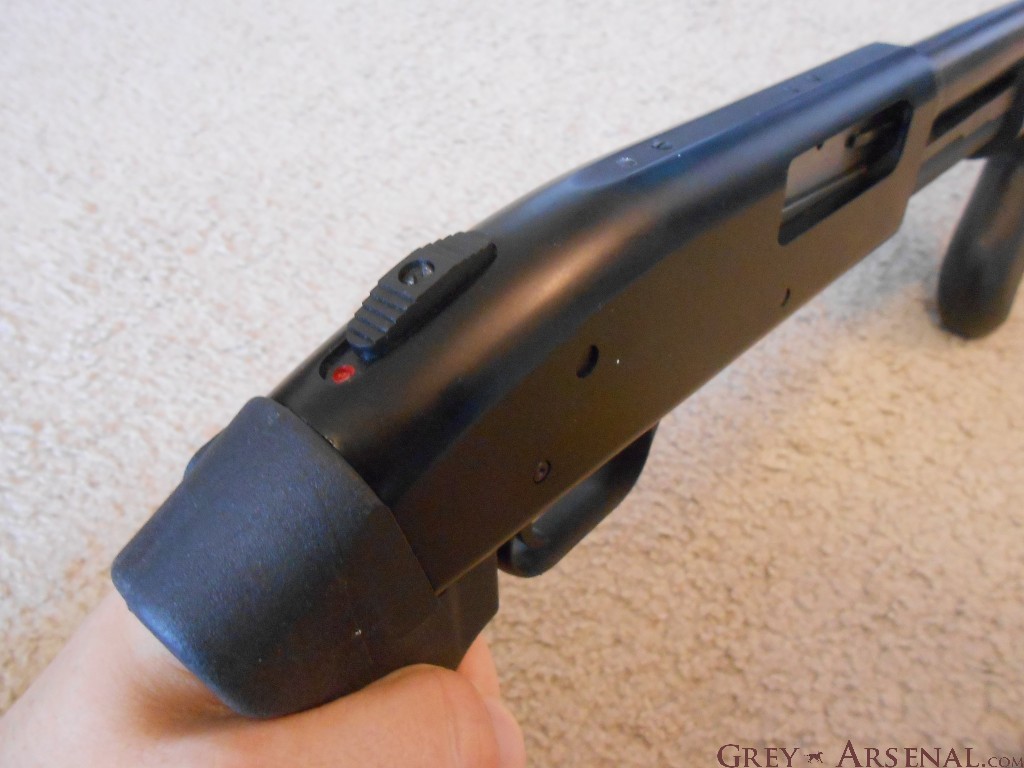 Note: As mentioned in the manual, many are shipped new with a wooden dowel rod in the end of the magazine tube to limit magazine capacity due to Migratory Bird Laws (capacity limit for hunting).  Additionally, “Bantam” models include a dowel that limits capacity to 1+1.  If there’s demand for it, I’ll expand this post with removal instructions.

There are two parts here that I’ll be showing, which makes it less confusing than the way it’s laid out in the manual.

The first part is if you would like to load to maximum capacity, having one round in the chamber, action cocked, and kept with the Safety ON.  This is how you would want to load the firearm if you were intending on carrying and using it, for instance when going out hunting, so that you can employ the firearm quickly and relatively quietly by just throwing the Safety OFF and ready to fire.

PART I: PRE-CHAMBERING A CARTRIDGE (if desired)

The second part is how to load the magazine tube.  When done in addition to the above, you’ll achieve maximum capacity, and are ready to fire by simply switching the Safety Lever OFF.

Additionally, you could do this on it’s own without loading a round into the chamber.  This is generally how most people keep the firearm if kept loaded to be used in a home-defense role.  It’s thought of as *safer* and if needed, all that needs to be done is cycling (racking) the action.  It’s often stated, but quite debated, about the psychological effect of a shotgun racking sound as a criminal deterrent- personally if they’re already in MY house, the best warning they’ll get is a Safety clicking OFF if they’re listening really closely, but to each their own.

Just like loading, unloading is done in two parts depending on whether or not there is a round chambered.  First, I’ll cover removing the chambered round, as you’ll want to do this before further handling the firearm to unload the magazine.  If stored WITHOUT a round chambered, skip to Part II.

PART I: UNLOADING THE CHAMBERED ROUND (and ensuring the next round in the magazine is not chambered)

Well, there you go.  If anyone would like any more detail, please let me know.  I may eventually expand this post into maintenance / disassembly instructions, and how to remove the dowel rod from the Magazine Tube to increase capacity.

If you liked the foregrip shown on the 20ga Mossberg 500 in this review, check it out here.

Want an easier way to get updates?

In an effort to help pay costs to keep this website up, my posts may contain affiliate links. If you click a link found here and make a purchase – Grey Arsenal may get a small percentage. This in no way influences our reviews or decisions on what to share.