I won’t pull any punches. Most cops- most, not all- suck at shooting. It isn’t their fault. It is an institutional policy that puts them in a place to fail. To put it simply, they aren’t trained for a gunfight.

Most Police Academies last an average of 6 months. In that six months, trainees typically get two weeks each of unarmed self-defense/restraint techniques and shooting. While some departments spend more time on each, two weeks seems to be the average. Much of each of these modules pertain to use of force and escalation of force using role play and simulators. During the unarmed combat section, there is often hands on, force-on-force training which prepares officers for the realistic expectations of dealing with a combative suspect. This is good training. Where the training fails, is preparing them for a gunfight.

Most Academies spend most of their time on when to shoot, and less on how to shoot to survive. They teach square shooting- Trainees are taught a proper draw stroke, proper weapon presentation, sight alignment, and trigger pull on a paper target on a static range. If most officers were shooting paper paraplegics, this would be fantastic training. But gunfights are fast, kinetic actions, where stillness will get you hit. Training officers for a week on a square range is setting them up to fail. For many officers, this is the only training they will get. Then they will shoot on an annual or biannual qualification test that consists of the same passing standards of the academy- shooting X rounds on a paper target in Y time period. This is not adequate to teach them to survive. What should be happening is force-on-force roleplay with simunitions or the like, with officers who have been in gunfights being the OPFOR. 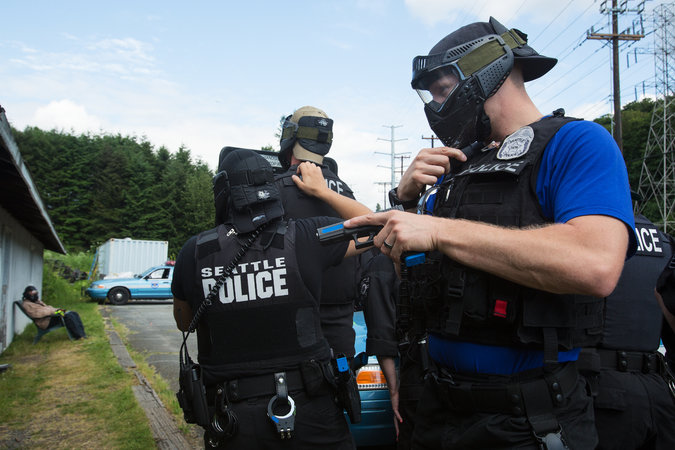 The military teaches a holy trifecta to win a gunfight- “Speed, Surprise, Violence of Action” If you have all three, you will win most of the time. But, in the words of Jagger, “You can’t always get what you want.” Troopers are further taught that if you can’t have all three, double up on the other two. Typically, an officer will not have the element of surprise. That means they need to put rounds on target, as fast as possible, pressing the fight to end. To do this, you need to have some actual experience with shooting accurately on the move, under stress. This can’t happen in a square cadence range of “Establish Grip-Draw-Present-Fire”. You need to teach officers to shoot, move, and communicate while under stress.

Until there is a basic change in training methods from the square mentality, cops will still fail to shoot well in real situations.

As I write this, we are hips deep in SHOT Show 2017 coverage. SHOT Show is the E3 of guns. For many, this is their favorite time of year. The industry as a whole uses this to show off new products, revisions to old products, and products that are in the pipeline. It’s great.

Except that it isn’t. Unlike E3, where there seems to be some accountability in actually producing on promises, SHOT seems to be where great ideas and good intentions go to die. While much of actual SHOT Show convention space is devoted to products already on the market. This is cool, but everyone knows about Glocks and Trititum sights. Most of the press coverage is devoted to new and unique products- this year things like SilencerCo’s Maxim 9 is the new hotness. Its awesome to see videos of guys getting to use and demonstrate these. Unfortunately, too often these things turn into vaporware. How many times have we seen a “Final Production Prototype” on the floor at SHOT with promises of “2nd or 3rd Quarter this year” only to never see hide nor hair of it again. Each year, I have gotten my hopes up on things like the Magpul Masada, US Palm’s takedown AK, or Desert Tech’s entire product line. The promises either end up never happening, becoming the Duke Nukem Forever of the gun world (I’m looking at you, Masada/ACR), being so delayed that people drop pre-orders, and the cool thing never has chance to thrive.

I understand that producing a new firearm is not a simple process. It takes a lot of time, R&D, and facility infrastructure to make. But until the gun industry learns it’s lesson the way the Video Game industry did, SHOT Show is demonstration of old news and vaporware.

Want an easier way to get updates?

In an effort to help pay costs to keep this website up, my posts may contain affiliate links. If you click a link found here and make a purchase – Grey Arsenal may get a small percentage. This in no way influences our reviews or decisions on what to share.